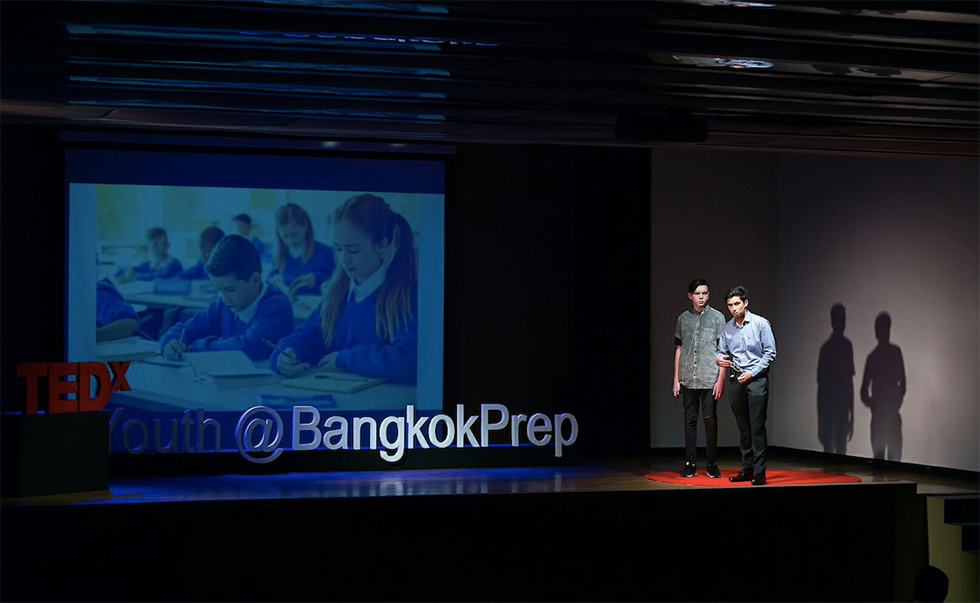 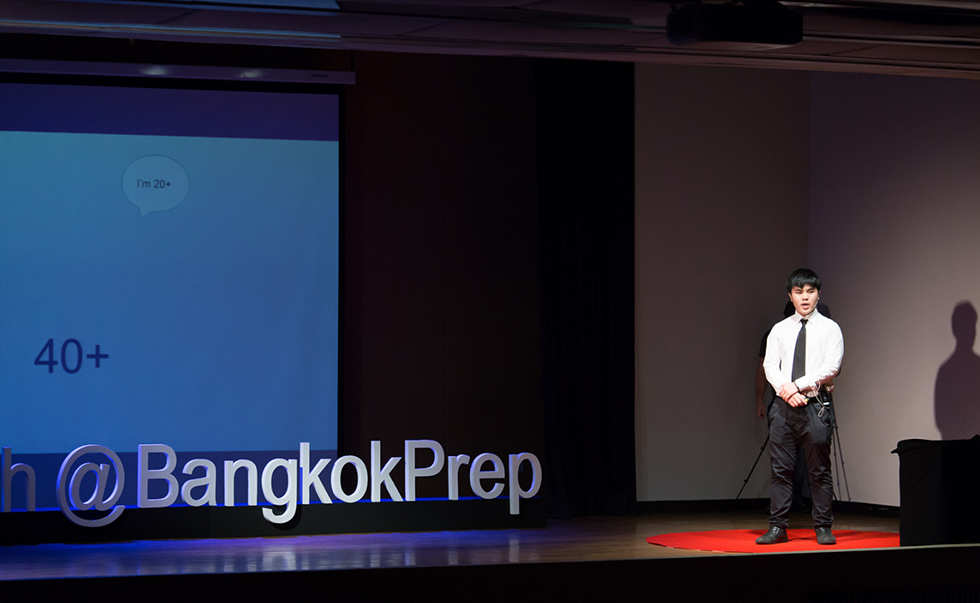 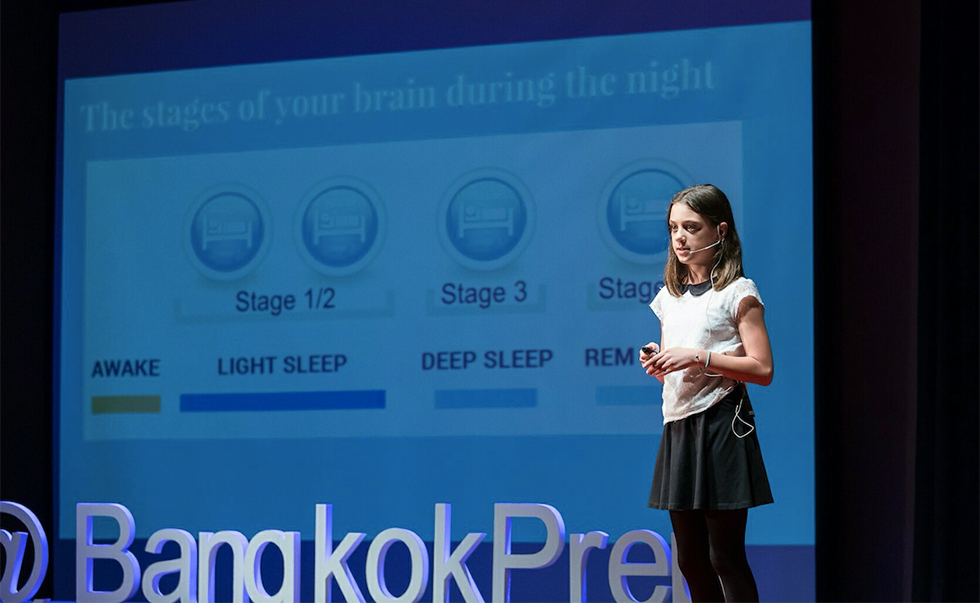 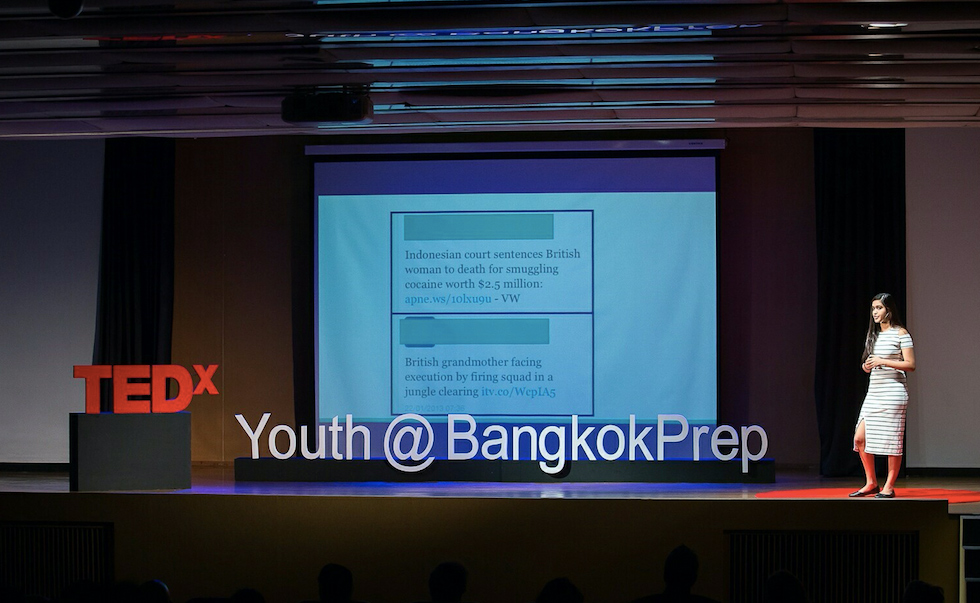 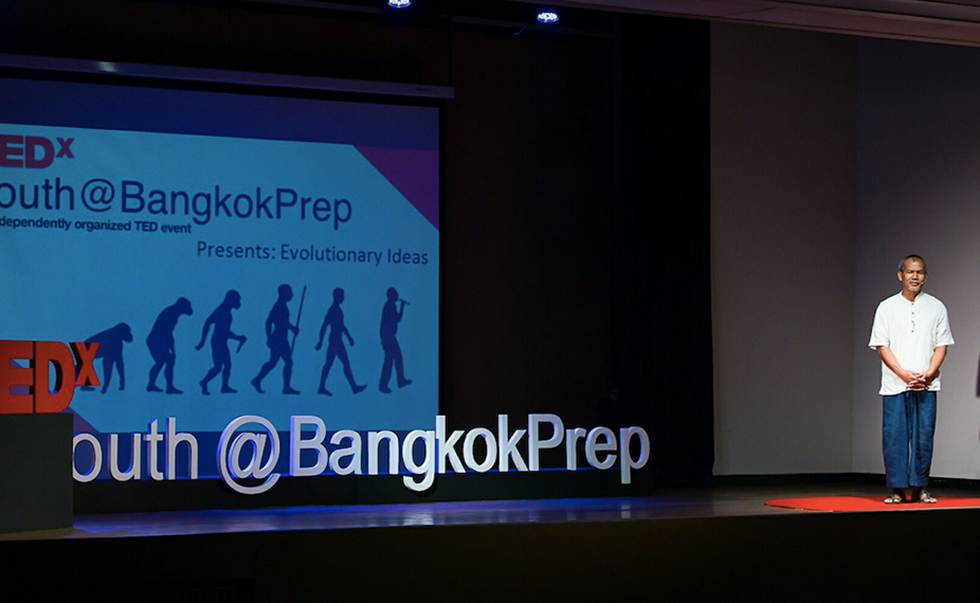 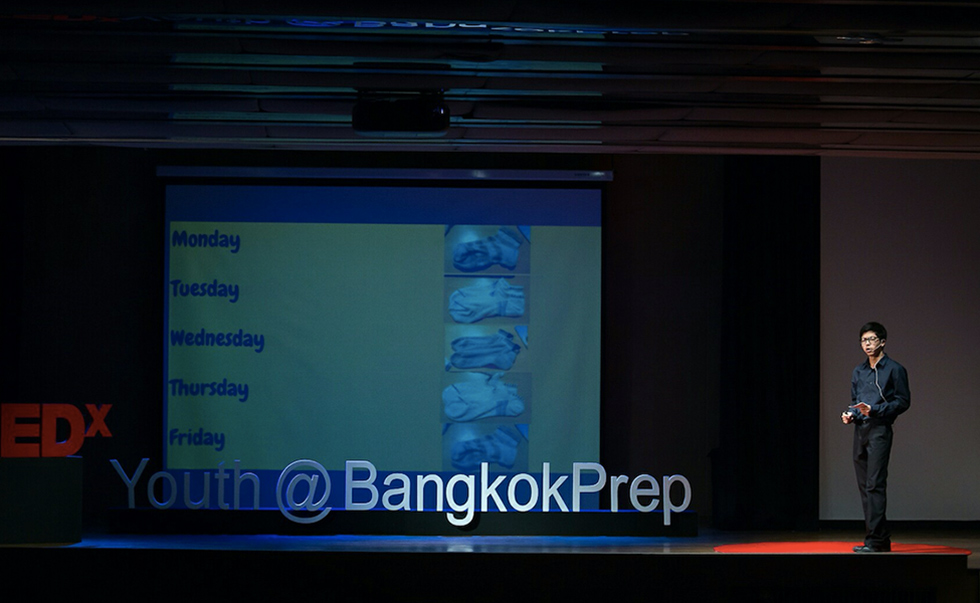 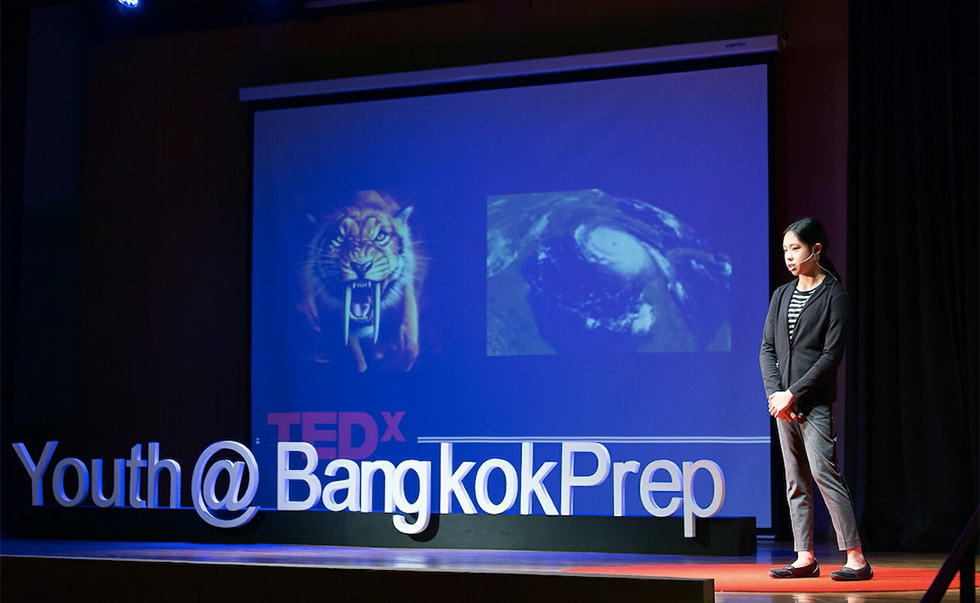 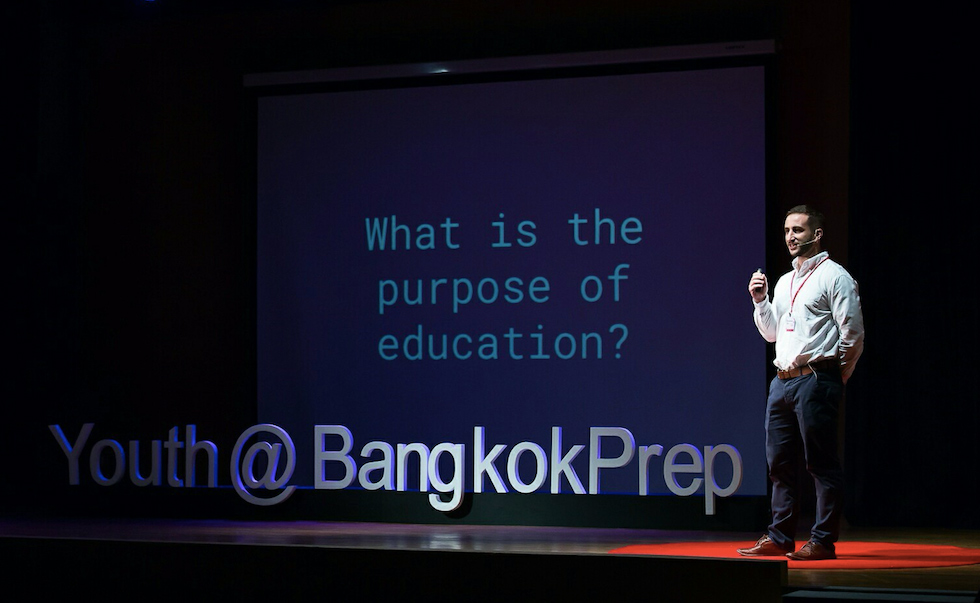 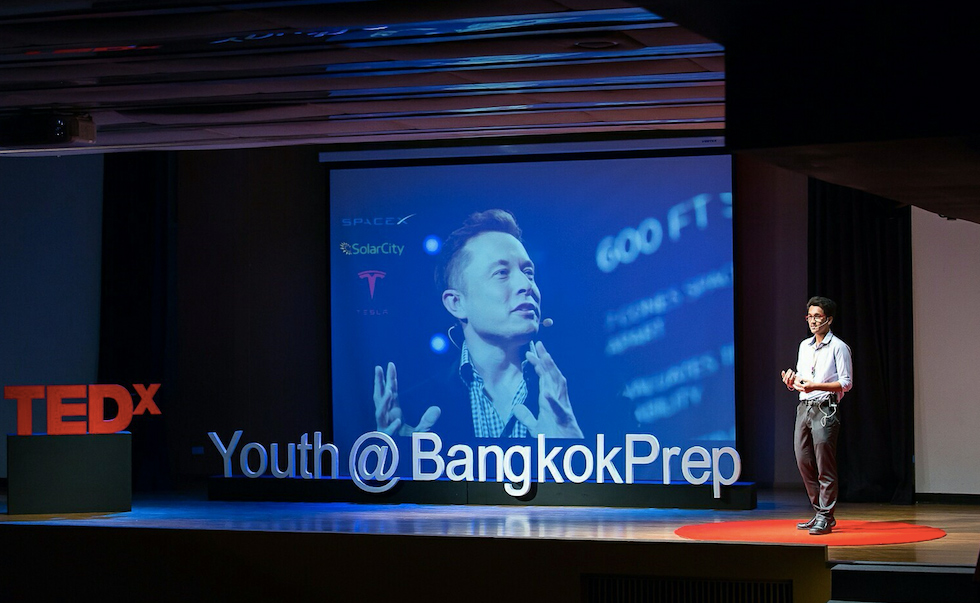 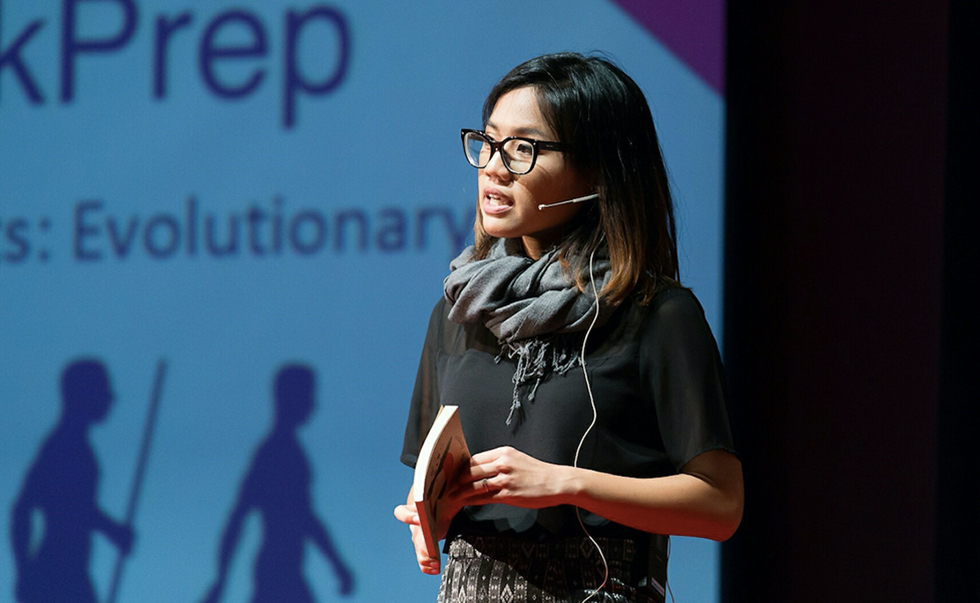 TED is a nonprofit organisation devoted to spreading ideas, usually in the form of short, powerful talks that are 18 minutes or less. TED began in 1984 as a conference where Technology, Entertainment and Design converged, and today covers almost all topics you can imagine – from science to business to global issues – in more than 100 languages.

The evening began with introductions by Punn and Krit, Head Girl and Head Boy at Bangkok Prep, followed by a thought-provoking opening speech by Bangkok Prep student Mayank on ‘Life Beyond Space’, where he pondered our place in the universe. Next up were two more student speeches – a talk by Charlotte on the true nature of nightmares, followed by Billy and Mark questioning if modern education is failing students – and then the first of the night’s guest speakers: Thammika Songkaeo, addressing the important topic: ‘Does Literature provide us with true answers regarding our national identity?’

Thammika is Social Impact Project Manager at the HEAD Foundation in Singapore. Born in Bangkok, she has also lived in India, Uganda, Rwanda, and the United States, thus bringing a broad and international outlook to her work and decision-making. Upon majoring in French Literature and Asian Studies, she joined a Ph.D. program in Comparative Literature, but switched to a career in education research after teaching undergraduate courses and realising how deeply student performance was the outcome of complex interplays of social and socioeconomic factors. She continues to suggest literature as a way of unveiling the self and societies, to better understand the individual and the world.

She was followed by a student talk by Khing, who asked the deceptively simple question: ‘Why do we fear things’?, and then the humorous but meaning-filled quandary addressed by Kazu on ‘Which pair of school socks should I wear today?’. They were followed by Kris Leverton – Eco-Schools Co-ordinator at Bangkok Prep – who asked the audience of students, parents and teachers: ‘Is sustainability the future of education?’, and then ended with a firm conviction that ‘Education is about providing the skills, mindset and worldview that will allow young people to make positive changes toward a sustainable future.’

The last three speakers brought the TEDx talk to a positive conclusion, led off by Bangkok Prep student Book, who asserted that ‘Productivity is the key to a happy life’, followed by Dhruvi’s talk on the positivity that results from ‘Changing your negative mind’. TEDx Youth@BangkokPrep concluded with a talk by guest speaker Jon Jandai: ‘Life is easy. Why do we make it so hard?’ The co-founder of the Pun Pun Center for Self Reliance, an organic and learning center in the north of Thailand where they practice sustainable living through seed saving and natural building, Jon describes himself as foremost a farmer. Describing his own simple background, he questioned the modern world’s emphasis on money, and why we have lost touch with the land and our ability to be self-sufficient.

The co-organisers of TEDx Youth@BangkokPrep were Richard Jones, Science and Physics Teacher at Bangkok Prep, and Secondary English Teacher Ashley Sherburn. Richard explains the duo decided to host TEDx to encourage students to share their interests and passions. Ashley adds, “Public speaking is a very difficult thing to do and it is really beneficial for the students to participate and strengthen this important life skill.”

For Ashley, the highlights from the evening were, “Seeing all of the students develop a speech. Not just the participants in the final event, but every student who took part from 11 to 18 years-old”, while Richard felt very proud of the students for showing such courage and ambition to be able to share their ideas with the school – and internet – community.

When asked what he took away from listening to all of the TEDx speakers, Richard replies: “I learned that everyone has a very different view about how the world works, and that if we ask students for their opinions, you can be surprised with the range of information you receive.” Co-organiser Ashley agrees: “I was reminded that we have a variety of intelligent ideas at our disposal. People aren’t afraid to share their ideas with others, whether it is educational or inspirational, and talk passionately about subjects close to their heart.”

Order of speakers:
Mayank – Life beyond space
Charlotte – Will nightmares change throughout time?
Billy and Mark – Is modern education failing us as students?
Thammika Songkaeo – Does literature provide us with true answers regarding our national identity?
Khing – Why do we fear things?
Kazu – Which pair of school socks should I wear today?
Kris Leverton – Is sustainability the future of education?
Book – Productivity is the key to a happy life
Dhruvi – Changing your negative mind
Jon Jandai – Life is easy. Why do we make it so hard?