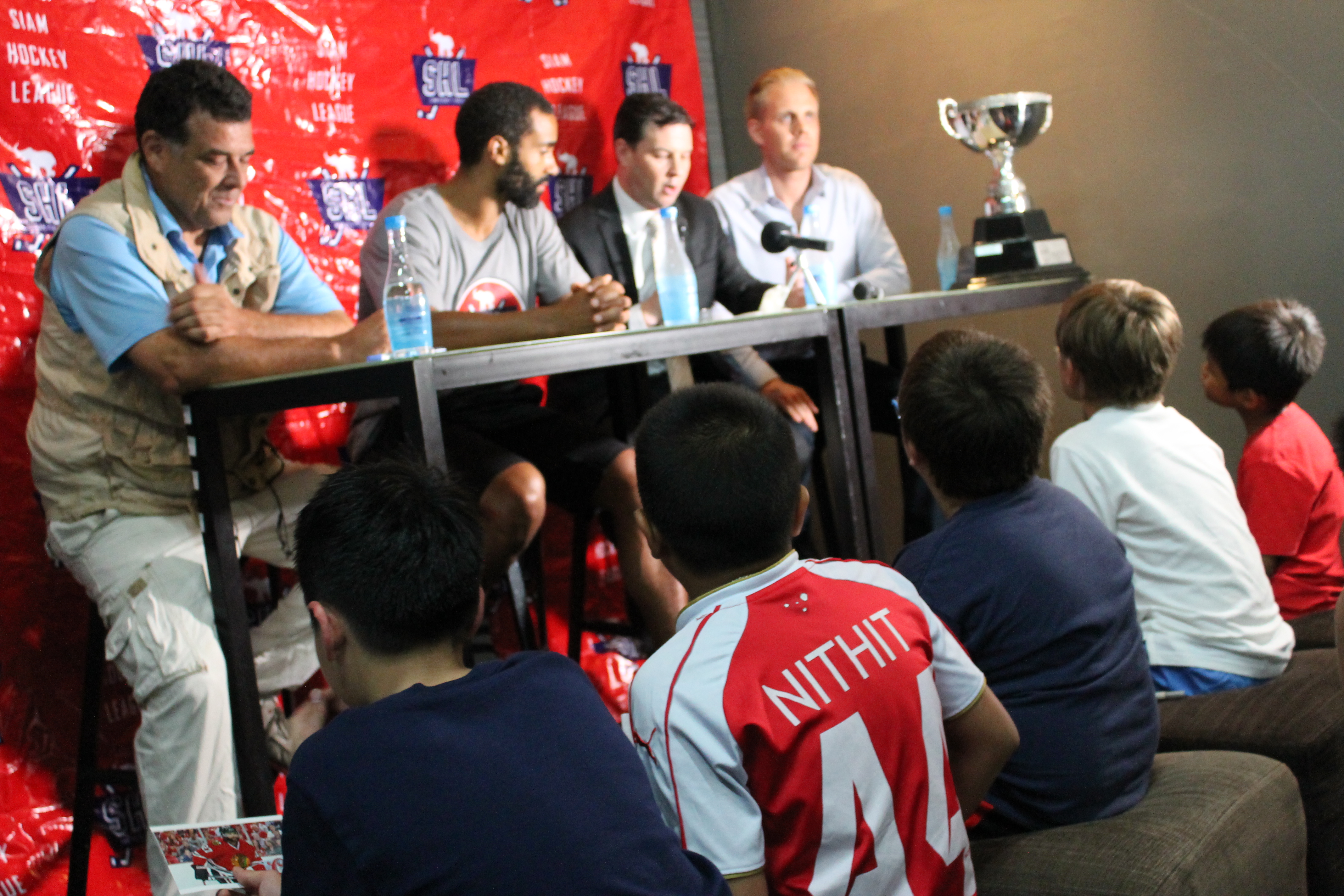 In the front row sat five young aspiring hockey players and watched in awe as the Chicago Nighthawks defenceman, Johnny Oduya, talked about playing the game they all love, and playing it professionally in the National Hockey League, NHL.

The Sweden-born, two times Stanley Cup winner and Olympic silver medallist visited The Rink at Central Rama 9 in Bangkok for a meet and greet with young enthusiastic hockey players on Thursday night, 29 June 2017.

Jari’s 6-year-old son is one of the boys who sat right in front of Oduya with an admiring look in his eyes. He was wearing a Chicago Nighthawks jersey, which he picked out himself when his parents took him to Canada.

“He is very excited to be here. It is past his bedtime, but this makes an exception. I think it is a very great opportunity,” said his dad, Jari from Finland, who has been living in Thailand for 12 years. 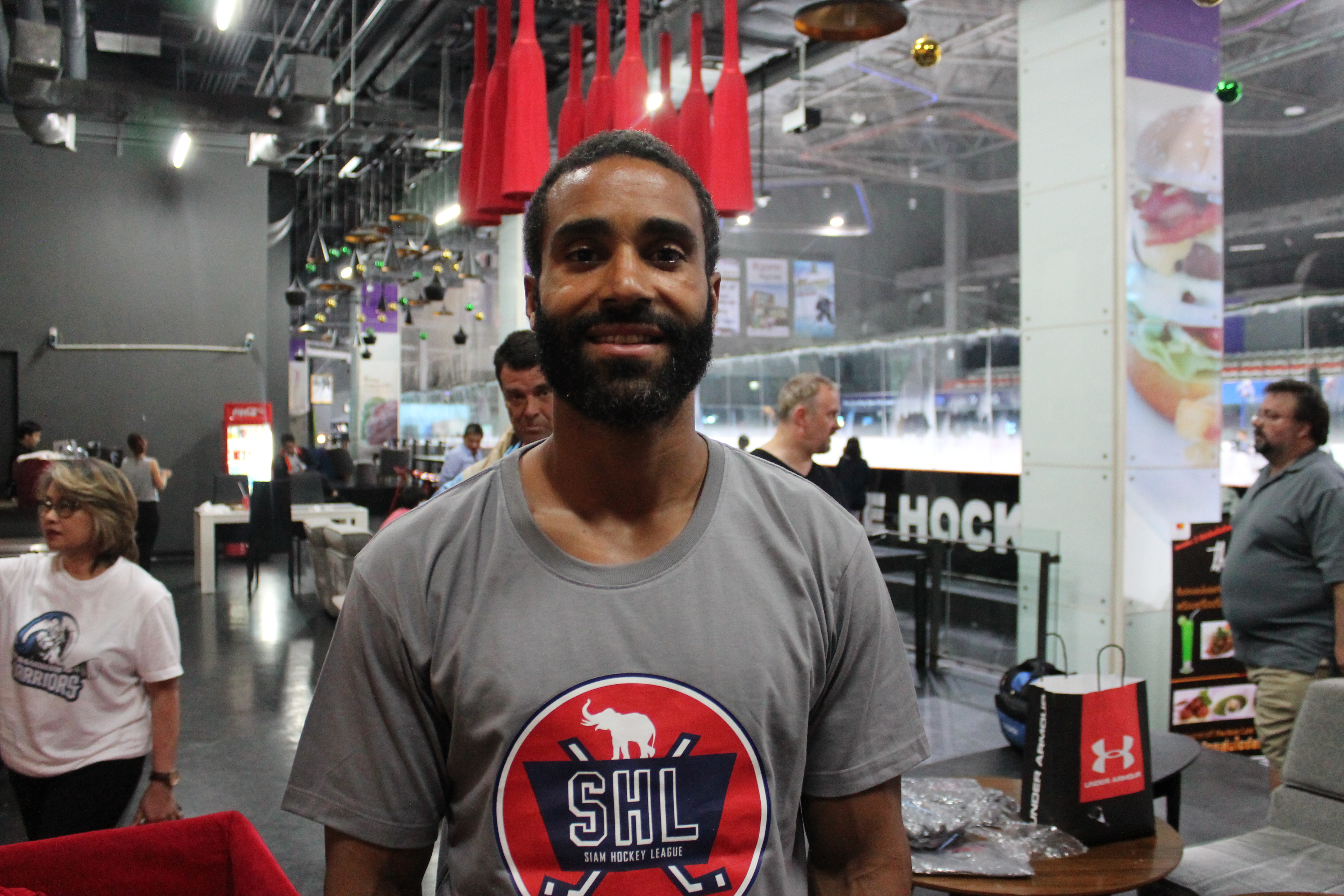 From Chicago Blackhawks to Flying Farangs

“It was many months of not knowing what to do, so me and a friend started looking around for a place where I could combine vacation and still skate,” said Oduya.

Oduya ended up getting in contact with Bangkok based expat hockey team, Flying Farangs.

“I do not think they really thought I was going to show up,” Oduya said with a laugh, “but I did, and I had a great time.”

Playing the Land of Smiles Tournament together with the Flying Farangs, Oduya won his very first trophy. Even after returning to NHL, Oduya frequently comes back to Thailand, and practises with Flying Farangs at Central Rama 9 whenever he is in Bangkok. 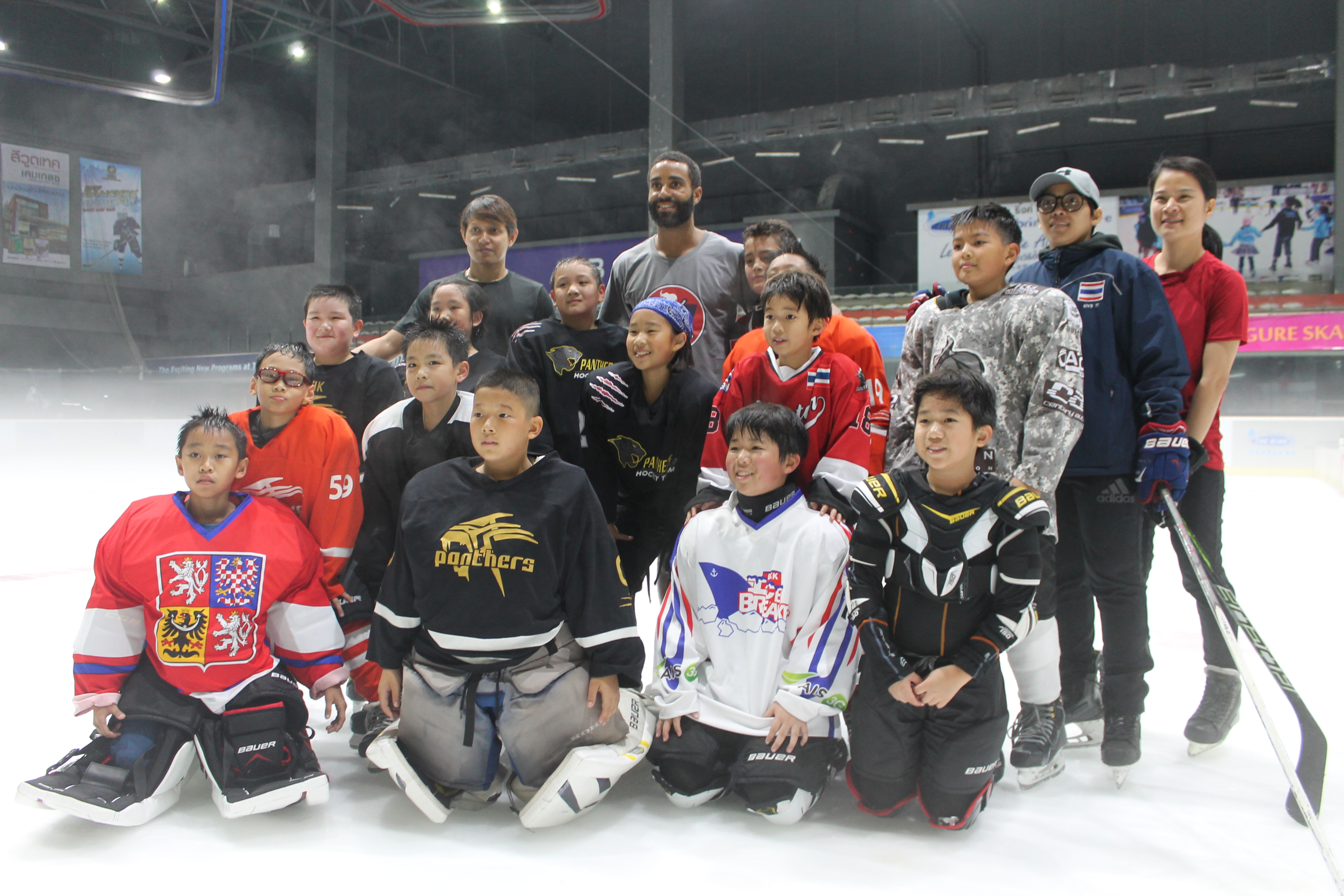 Hockey for both Thais and expats

Through his short time with the Flying Farangs, Oduya made some good friends. One of them is John Schachnovsky, a hockey enthusiast who also works at the US Embassy as FBI Legal Attache in Bangkok.

Siam Hockey League has created an arena for adult hockey players to play and compete with other teams. The league consists of four teams; Hooters, Titanium-Sport Corner, Spitfires and Aware, and boasts most of the best players in the country.

“Right now we are a lot of expat players. The goal is to bring more Thais into hockey as well,” said Schachnovsky. 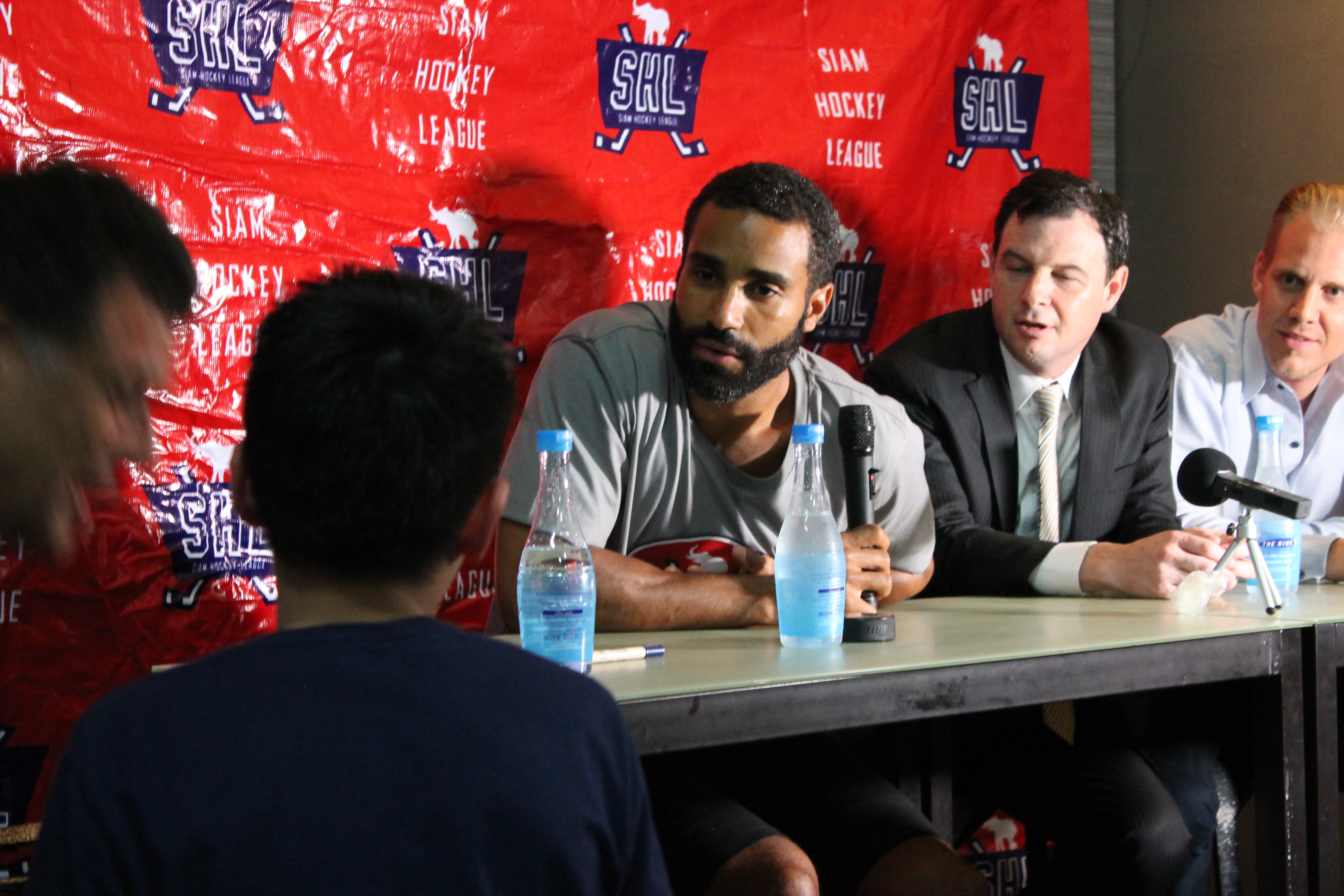 But on Thursday night, the SHL were also behind giving children in Thailand an opportunity to meet a real NHL player.

After a short presentation of Oduya, the children had the chance to asks him questions, ranging from asking about whether Oduya thought he was internationally famous, to when he started playing, and who he would usually sit next to on the Chicago Blackhawks bus.

The children also got a chance to get up close to the Blackhawks defenceman. When everyone had asked their questions, the children eagerly lined up with their hockey sticks, jerseys and pictures to have them signed by Oduya while parents proudly snapped photos of their children enjoying Oduya’s company and attention. 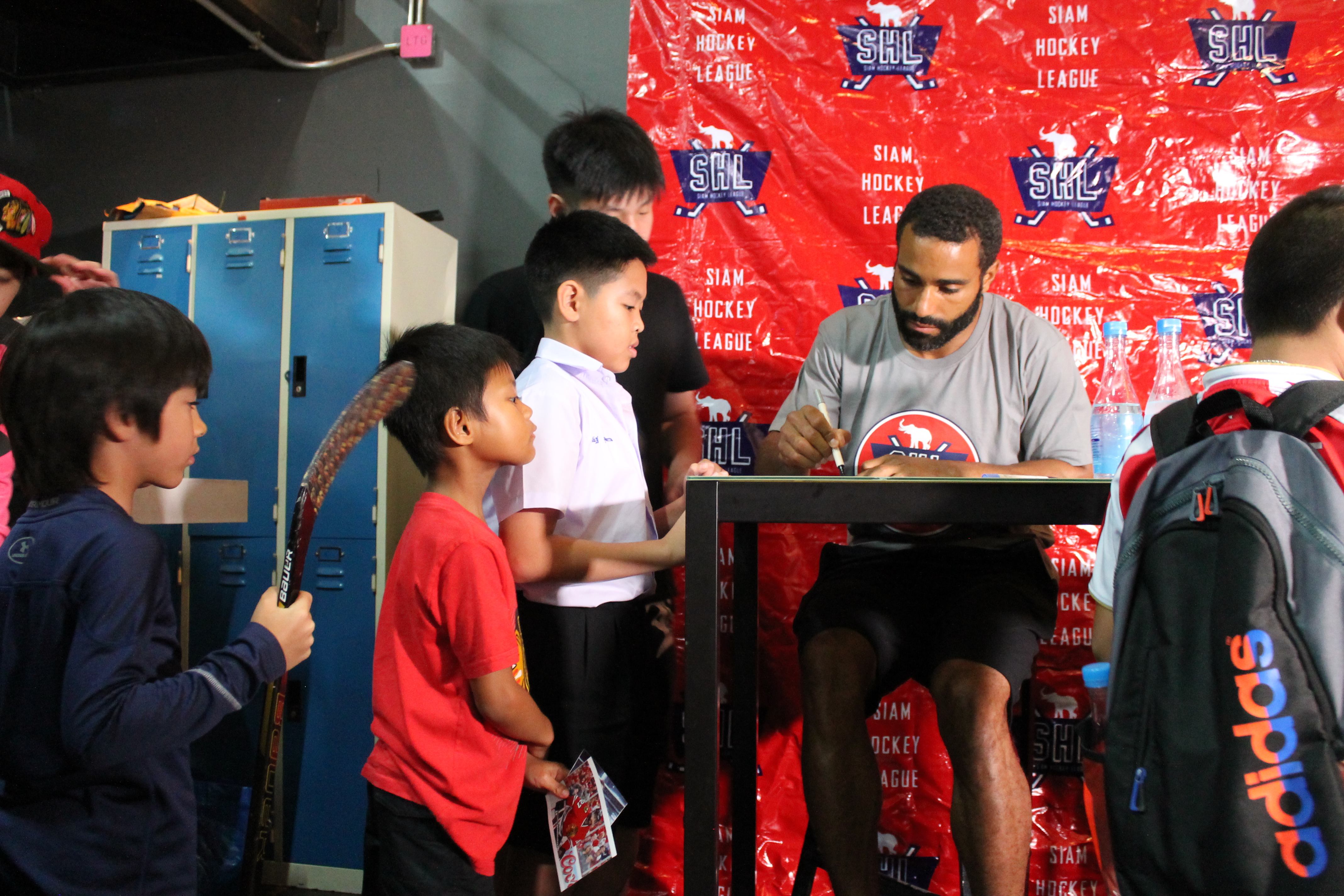 To help grow ice hockey in Thailand and make playing time affordable for Thais, one young Thai ice hockey player, with an ambition to further develop their hockey career, will be chosen for a season-long scholarship to help improve his or her skills on the ice.

A hockey player in Thailand may not have the same opportunities as a young person playing hockey in Scandinavia or America, but Oduya hopes that maybe the Scholarship can help someone live out their dream and play professionally.

“It is obviously very tough, and there is a long way to go from growing up and playing here. In the future, maybe somebody will be good enough and have the dream, and if this can help them along the way, I think that is great,” said Oduya.