A clip showing the Thailand-based Swede Michael Baines’ (restaurant owner in Chonburi) efforts in caring for the many stray dogs there has recently had tremendous impact online. Over 42 million views (according to Michael) via the Internet in just seven days is the sensational result, as the clip showing his daily routine feeding over 80 stray dogs on Facebook started going viral via the Swedish nyheter365‘s pet site ‘Newsner Animals’. 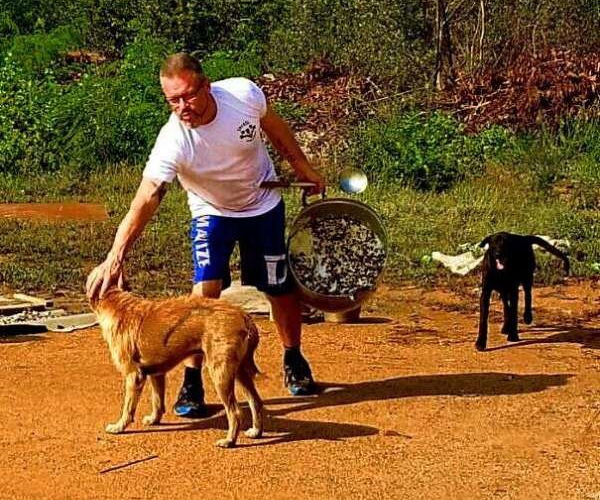 Newsner that in just a few months has become the largest viral site and one of the fastest growing media sites, with Swedish, German, Turkish, Spanish and English content.

The film quickly aroused strong reactions, and had over 2 million views and with interactions in the hundreds of thousands back in Sweden.

The film has been translated into seven languages, and the English version has gone super-viral with over 25 million views and 2 million interactions, completely organic. The world’s largest pet site – The Dodo – also picked up the news clip.

Michael himself is overwhelmed by the reactions.

“It’s crazy! I receive hundreds of messages around the clock and friend requests from all over the world. I have received over 2400 personal friend requests and a flurry of messages, which I tried to answer all. Even people who want to help me on the spot.”

14 years ago, Michael J. Baines, ‘The man that rescues dogs’, left his home to go to Thailand and work in a restaurant. While at work one day, a street dog came by. She’d just had puppies, and was badly infected and very thin. Michael’s heart broke for her, and so he began to feed her every day.

“That’s how it all started… I just can’t stand seeing dogs in distress,” Michael told Newsner.

H decided to try to make a difference and began devoting much of his spare time to helping street dogs. Every day, whatever the weather, he goes out and supplies about 80 dogs in different places. He has also sterilized hundreds of street dogs and himself adopted nine.

Michael’s work is entirely voluntary, and he has put a lot of money out of pocket, writes Newsner. He is constantly dependent on donations to be able to afford to help the dogs, and via his Facebook page one can follow his work.

The people who donate money has now grown significantly. After Newsner’s movie about Michael was published he suddenly has a whole world involved in his work.

“It feels like I finally received recognition for those 5 years I worked on this. I am happy both for me and of course for the dogs.”

“It’s amazing that we can create such a strong commitment to a good cause. Our animals audiences tend to be keen to share and comment but we have never seen this kind of response before it really shows the power of the moving image has in social media right now,” says Anna Bouvin, editor and director of Newnser Animals.

“It means that maybe I can expand myself with others, who can work more actively with sterilizations and adoptions. It is very positive, not only for me and my dogs but also dogs in other countries. People have told me they cried when they saw the clip and that they intend to start helping the dogs again. I have apparently touched their hearts,” says Michael.

He has even received offers from people who want to come and work as volunteers with him – a big step toward realizing Michael’s dream, which is to dedicate his full-time, and sterilize as many as possible within a larger area.