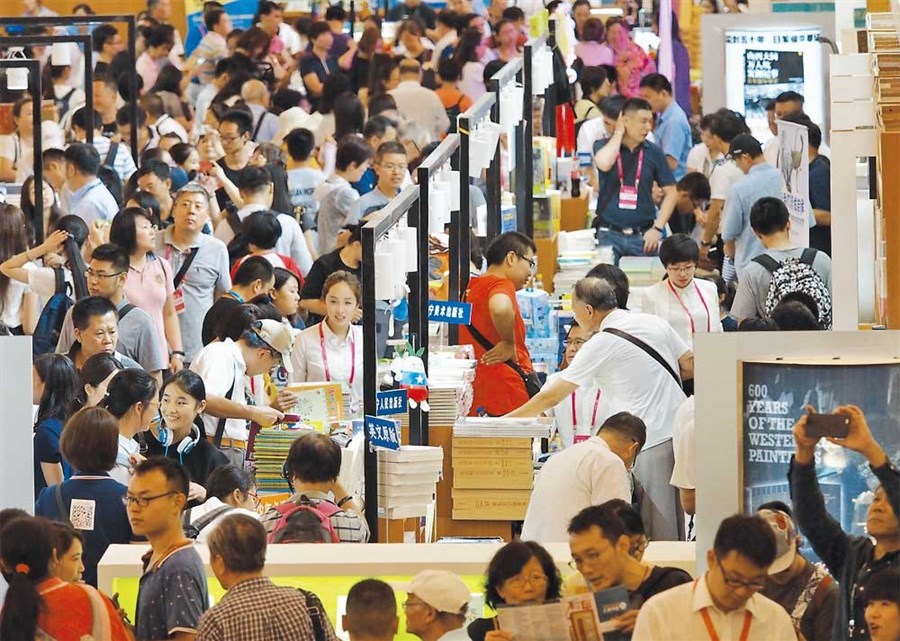 Book worms packed the Shanghai Exhibition Center on August 16, after the opening of the annual Shanghai Book Fair.

Do not judge a book by its cover – is an idiom you hear often. However, at the Shanghai Book Fair that started this week, Swedish designer Elina Warsta considers a book’s design the link between a writer and a reader.

The Shanghai Book Fair started on August 16 2017 at the Shanghai Exhibition Center and provides a weeklong feast for the city’s bookworms. Here the best-designed books from Sweden, Finland and China are featured at an exhibition.

“Book design must be eye-catching, interesting, but also very true to the text. I think book design is the link between the writer and the readers,” said Warsta.

She said when she did the design for “In Maj’s Kitchen,” her featured book in the exhibition that tells about a housewife cooking in the 1940s to 1960s in Sweden, she was thinking of her grandmother and her kitchen throughout the designing process.

This year the event features more than 150,000 titles from over 500 publishing houses and about 950 reading events.

As the fair’s guest of honor this year, Liaoning Province of north China has brought over 4,000 titles and 57 events to the event.

In addition to books on Mukden Palace in the province’s capital city Shenyang, and transition of the country’s industrial basis to smart manufacturing, the local publishing houses also brought a wide variety of new titles, particularly children’s books.

Readers will also be able to enjoy performances including Chinese shadow puppetry in the province’s pavilion.

Through the books and events presented, the Northern Province wants to bring its culture and development closer to the city’s readers.

In addition to the main avenue in the exhibition center, a total of 16 district-level libraries and 40 local bookstores serve as branches of the book fair this year.