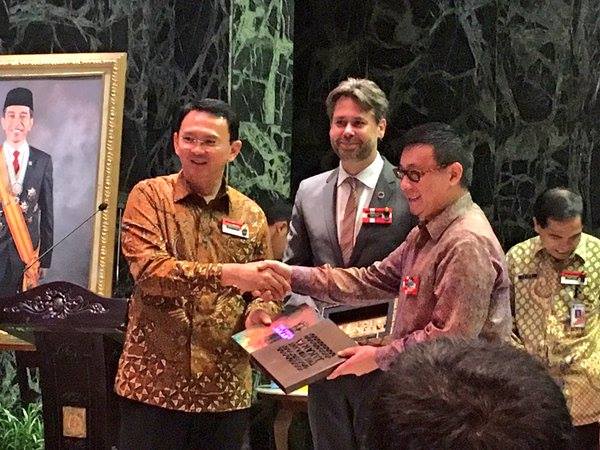 (Photo: Embassy of Denmark in Indonesia)

Danish Ambassador in Jakarta, Casper Klynge, and Jakarta Governor, Basuki “Ahok” Tjahaja Purnama, had a playful friday in the City Hall, as the Ambassador handed over 34 big boxes of Lego to the Governor.

The toys was donated to 34 integrated child-friendly public parks ( RPTRA ) across Jakarta to enhance the creativity of children through playing.

The handover was part of an ambitious plan of establishing 267 Community centres in Jakarta. Lego plays a big role in this plan, as the Danish toy company will train a staff from each centre and in collaboration with the Embassy continue donate a big box of Lego to each centre as they open.

“Lego can help children build their creativity while playing. As I and the Jakarta governor discussed some time ago, the city has now built many RPTRAs and we’re very pleased to support the administration. Therefore, we are giving Lego to the children in Jakarta,” Casper Klynge said at City Hall, where 30 children, the mayors of the municipalities where the centres are placed and local media also attended.

You can watch local media, Berita Jakarta’s, spot from the handover here.

Governor Ahok thanked the Embassy for the donation and granted the attendance with a speech.

“The most important thing is that our children play the same toys that European children play with. If the toys are the same, we hope, the creativity of our children will not be less than that of children in other countries. We have to learn from the Europeans, who aren’t afraid to compete,” Ahok said.

You can watch the full speech here: